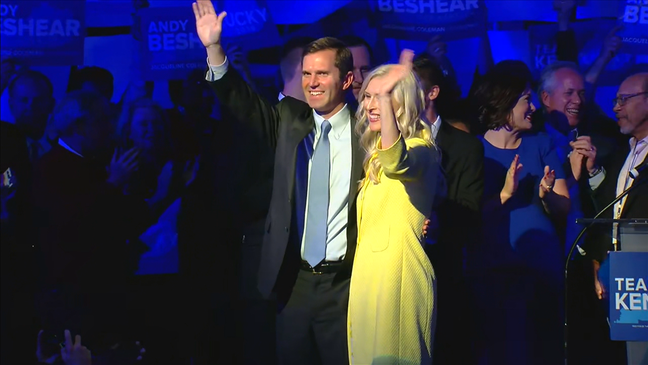 In Virginia and Kentucky, Donald Trump hurt Republicans far more than he helped.

emocrats made major gains in state-level elections across the country on Tuesday, revealing President Donald Trump’s weakness in even the reddest of states and putting the lie to the idea of a massive voter backlash against House Democrats’ impeachment inquiry.

In Kentucky, a state Trump won in 2016 by about 30 percentage points, Attorney General Andy Beshear (D) apparently unseated Republican Gov. Matt Bevin by harnessing discontent with Bevin’s attacks on the state’s Medicaid expansion and his efforts to pare back public-sector pensions. As of late Tuesday evening, Beshear led Bevin by 0.4 percentage points, though Bevin did not concede the race.

“Tonight, voters in Kentucky sent a message loud and clear for everyone to hear. It’s a message that our elections don’t have to be about right versus left,” Beshear told a celebratory crowd of supporters at his election night watch party in Louisville. “They are still about right versus wrong.”

Although the issues that dominated the race were not national in nature, Trump’s inability to rescue Bevin with a last-minute visit spoke to the limits of the president’s appeal. At an election-eve rally in Lexington on Monday night, Trump went so far as to tell the crowd of supporters that a loss for Bevin would prompt people “to say Trump suffered the greatest defeat in the history of the world. You can’t let that happen to me!”

In Virginia, which has been trending Democratic for at least a decade, the party wiped out the last vestiges of Republican power. By flipping both the House of Delegates and the state Senate, Democrats under the leadership of Gov. Ralph Northam (D) have secured what is known as a “trifecta” by bringing the state under unified Democratic control. The party now has the authority to not only pass a raft of stalled progressive bills but also to shape the 2021 congressional and legislative redistricting processes, which the GOP used to its advantage in 2011.

As of late Tuesday night, the results in Mississippi, which also had a contentious gubernatorial race, were more disappointing for Democrats. Attorney General Jim Hood, a socially conservative Democrat, lost to Lt. Gov. Tate Reeves, whom he was trailing by about 8 percentage points with over 80% of the votes in.

Early estimates suggested turnout in Kentucky’s elections ― held in what’s called an off-off year, when neither congressional seats nor the presidency are at stake ― was extremely high, indicating an unusually engaged electorate heading into 2020′s presidential contest. Some 1.4 million people voted in Kentucky, according to NBC News, up about 400,000 from the last gubernatorial contest four years ago.

Democratic gains in the two states followed a similar pattern. The areas that swung hardest for Democrats were in the suburbs of major metropolises, where highly educated, generally upper-middle-class voters have been most dissatisfied with Trump’s performance. Beshear performed especially well in the suburbs to the south of Cincinnati, Ohio, for example. And although Trump had lost to Hillary Clinton in Jefferson County, which includes Louisville and its suburbs, by less than 14 percentage points in 2016, Beshear defeated Bevin there by over 35 points. Likewise, though Clinton’s margin in Fayette County, which includes Lexington and its suburbs, was less than 10 points, Beshear’s was over 32 points.

On top of taking back the state, Virginia Democrats celebrated several symbolic wins. Del. Danica Roem (D) won her reelection campaign after she made history in 2017 as the state’s first transgender lawmaker. Her opponent, Kelly McGinn, has a long history of homophobic comments, once calling the institution of same-sex adoption “a social experiment on children.” In Virginia’s 10th District, Ghazala Hashmi, an educator and Indian immigrant, ousted Republican incumbent state Sen. Glen Sturtevant, making history as the first Muslim American woman to be elected into Virginia’s state legislature. Further down the ballot, Juli Briskman, who made headlines in 2017 for flipping off President Trump’s motorcade, won her campaign for board of supervisors in Loudoun County.

The common factor in Democrats’ big victories in Kentucky and Virginia is the weakness of Trump’s brand. Although Virginia’s legislative elections were more directly shaped by the Trump presidency, Trump’s inability to help Bevin overcome the unpopularity of his state-level policies demonstrates the president’s lack of clout ― even in a state he won easily and will likely win again in 2020. Given the high turnout among voters bucking Trump’s preferred candidates, as well as Democrats’ strong performances in metropolitan areas where Trump held Clinton to a narrow margin, the elections suggest Trump is in trouble next year.

May 2 - Primaries in Kansas and Guam

May 19 - Primaries in Kentucky and Oregon

The Democratic convention is slated for July 13-16 in Milwaukee.